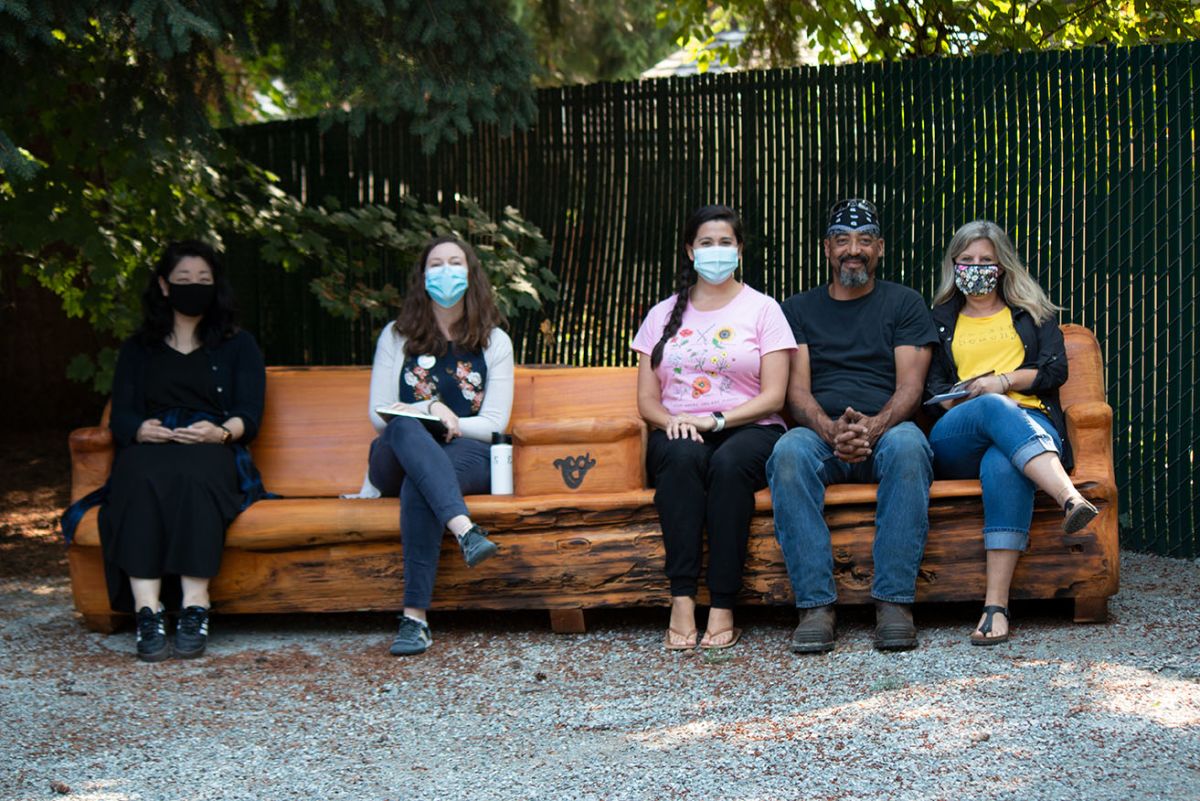 Did you know that we have a School Yard Wildlife Habitat at the Main Building and it is often used as an outdoor learning space? Last year, the newly formed Environment Group met and started planning updates for this space and how to involve students in environmental studies and mentorship.

As part of their plan, a woodcarving artist was commissioned to create two couches (benches) and three chairs. The artist, Tony Robinson, started the process on August 19 and delivered the pieces to Eton School on Friday, September 4, 2020. All five pieces arrived on the back of a flatbed truck and our Chief Financial Officer, Jason Mallon who headed the project with Tony, was the first to try one of the chairs.

Along with the artwork, a crane arrived to put the pieces in place. After the crane was positioned and balanced, straps were placed around the first smaller chair and secured. The crane then lifted the smaller chair over the roof of the Main Building and lowered it on the patio near the habitat area.

After all three chairs were moved and put in place, the large couches were next. The artist, Tony Robinson, watched as they lifted the couch off the truck on the parking lot side and then came to the habitat area to help with placement. Eton staff were also on hand to watch and help.

After the first bench was placed just off of the patio, Tony shared with the staff about the wood. The three chairs were carved from Washington state redwood trees and the first couch was a cedar tree that once lived by a courthouse in Monsanto, Washington. The staff tried out the couch and discussion followed on all the many ways of sharing information about the tree itself and the story trees tell with their rings.

The last couch was lifted and moved to the newly renovated space in the area that once hosted small garden beds. You could feel the excitement and astonishment of the gathered group as the bench appeared above the rooftop and made its way over to be placed. Here is a quick photo slideshow showing this process.

As you can see, once it was in place, the staff and the artist took a moment to enjoy the couch and pose for a photo with the artist. To view Tony Robinson's process of creating these wooden masterpieces, visit his Facebook page, and view the post from August 19, 24, and 28.